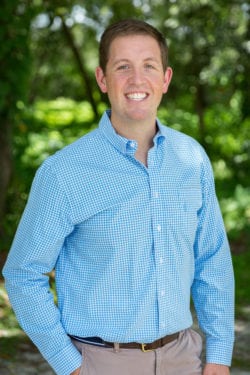 Dr. Miller earned his Doctorate of Dental Surgery from Virginia Commonwealth University’s School of Dentistry where he graduated Magna Cum Laude and was inducted into Omicron Kappa Upsilon Honorary Dental Society. Dr. Miller spent nine years proudly serving his country in the United States Navy. He completed an Advanced Education in General Dentistry Residency while in the Navy where he was able to greatly expand his skills and love of dentistry. He received three Naval and Marine Corps Achievement Medals and also won the Provider of the Year award while stationed at Naval Health Clinic Charleston. He is on the board of directors for the Dental Society of Greater Orlando and is a member of the Spear Study Club. Dr. Miller’s career is not only marked by a sincere concern and commitment to improving the health and welfare of his patients, but he also continues to immerse himself in continuing education.

He is married to Allie Miller, a Pediatric Dentist, and they have two beautiful daughters, Harper and Bryn. In his free time, Dr. Miller enjoys spending time with his family, going to the beach, and participating in sports of all kinds.